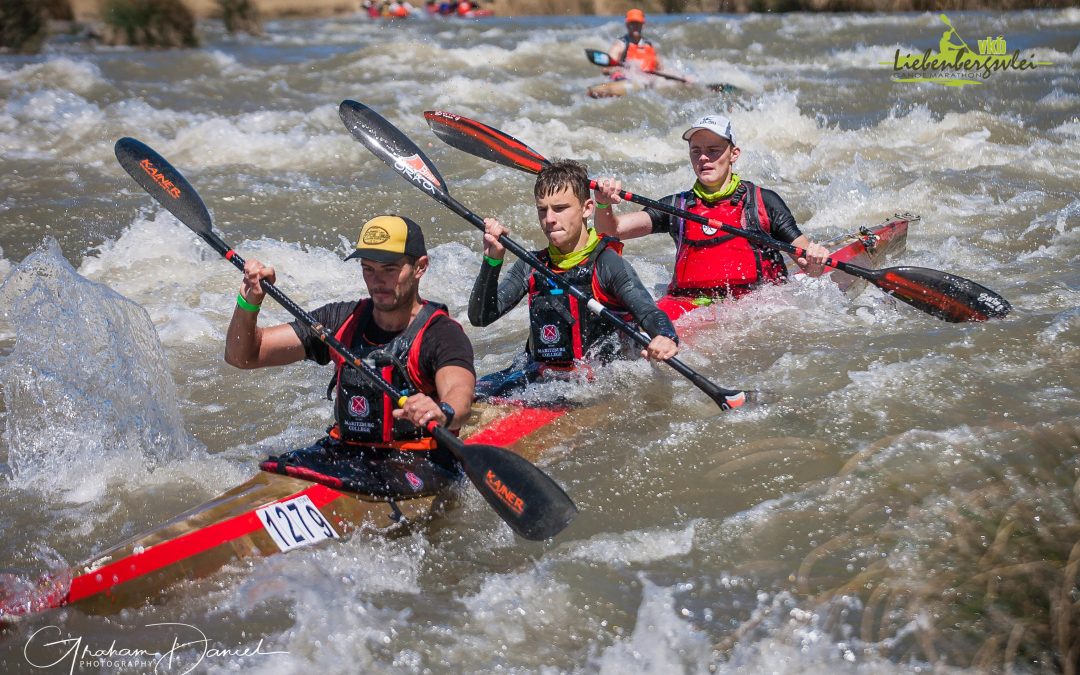 The 2019 VKB Liebenbergsvlei Canoe Marathon is all set for another bumper edition this coming weekend with over 300 confirmed entries and another 100 paddlers expected to join the ranks of those attempting the 2-day 63km adventure down the Liebenbergsvlei River, on fresh, clean water released out of the Ash River, from the Katse Dam in the Lesotho Highlands.

After 20 years of racing on the Liebenbergsvlei River, from the early days of the Tracker Challenge on the upper stretches of the river and now more recently the VKB Liebenbergsvlei Canoe Marathon, two glorious days of racing on the lower section of the river are awaited. The beauty of this river is that there is always guaranteed clean fresh water. In the early days the river was raced at 5 cumecs (the volumetric flow rate) and there have been some pretty exciting races when the water level was up to 45 cumecs.  At each level this river brings very different racing conditions. This year there is an anticipated 15 cumecs which would be a great level for an interesting race.

The race looks set to be a duel between the KZN combination of Hamish Lovemore & Stewart Little (both Varsity College), against the Gauteng crew of Clinton Cook and Wayne Jacobs (both Dabulamanzi Canoe Club). Cook & Lovemore are both winners in their own and combined capacities but are choosing different partners for this year’s much anticipated showdown.

Both crews will however be challenged by a number of young crews who are looking to seize the overall title as well as the prestigious title of SA Schools River K2 Champions, which this year’s race doubles as. Canoeing South Africa will be on hand to award these medals to winners in all the corresponding Schools Categories.

VKB, a dynamic and leading agricultural enterprise continue to support this community based event and this year are proud to make the Canoe Marathon part of their 100 year celebrations. Plans are afoot to entertain and accommodate the athletes in true Free State hospitality style and the Saturday evening celebration will be one not to be missed.

Late entries for the race will be accepted at the start / registration at Reitz Waterworks from 8am on Saturday morning.

VKB Landbou are a modern, dynamic and leading agricultural enterprise that have, since their establishment a century ago, constantly focused on progressively managing solutions for the changing and various needs of agricultural producers and related stakeholders. Three VKB brands including Grain Field Chickens, Super-Sure Bakery & Magnifisan Maize Meal will supply an amazing meal to the paddlers after Day One!